Sprinkle Macarons / Hundreds and Thousands French Macarons - a grown up version of a childhood treat. Vanilla French Macaron shells, sprinkled with hundreds and thousands, and sandwiched with an American buttercream for the perfect nostalgic treat. 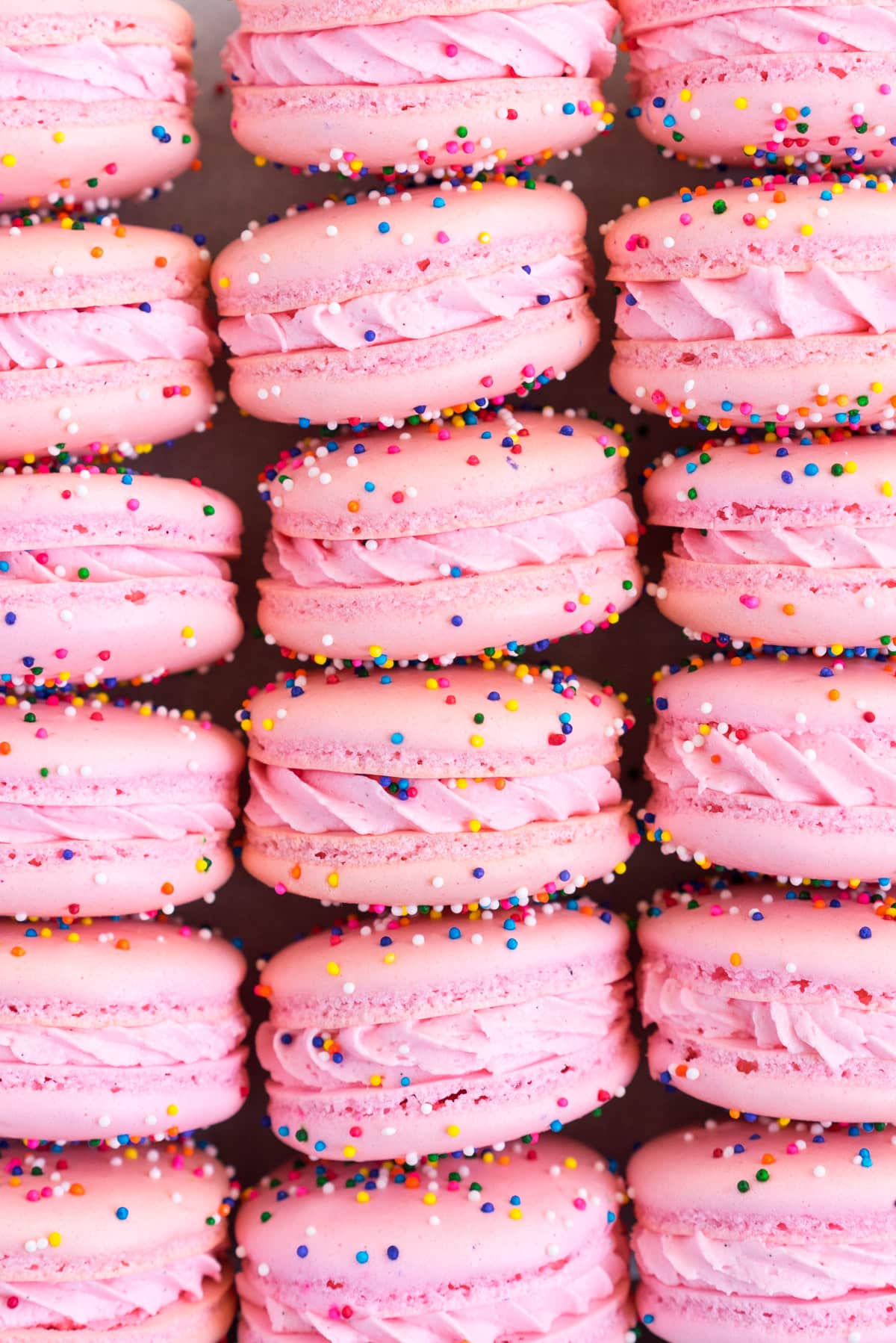 I have a confession to make. I can't make rice. To be fair I never really took the time to learn properly - I just tried a few times, made seriously gross mush (rich described it as 'melt in your mouth' one time just to be nice), and then bought a rice cooker, and I haven't had an issue since.

Unfortunately, macarons aren't such an easy fix. I fell in love with these little cookies a few years ago. After a few times making them, decided that they were too tricky, and popped them directly into the too hard basket. I blamed my oven. I blamed the weather. I blamed all sorts of things. I put them out of my mind and just decided that I couldn't make them, but they stayed lurking there, until I decided recently that it was time to give them a go again.

I was convinced my oven was the issue, so I set out to make them in a countertop convection oven. This produced allll kinds of weird results - perfect shells and a nice foot, but on the strangest angle i've ever seen. About 10 batches in I decided that it was probably time to try something else, because this wasn't working. I had tried swiss meringue, and Italian meringue, but had stayed away from french because it was 'harder' to make macs with.

All it took was a well timed visit to my friend Jase's house with a couple of passionfruit. I made a passionfruit curd then sat at his breakfast bar and watched him make macs, carefully taking mental notes of each step, before realising that I had been doing most of it right all along, and I just needed to keep trying. And so I went home, busted out the food processor again, and proceeded to FINALLY make a batch of macs that were worthy of being called macarons. I was worried I had fluked it, so told myself I had to make another six batches that were perfect before I was even allowed to think about sharing the recipe. And now look where we are! Cloudy Kitchen can make macarons. 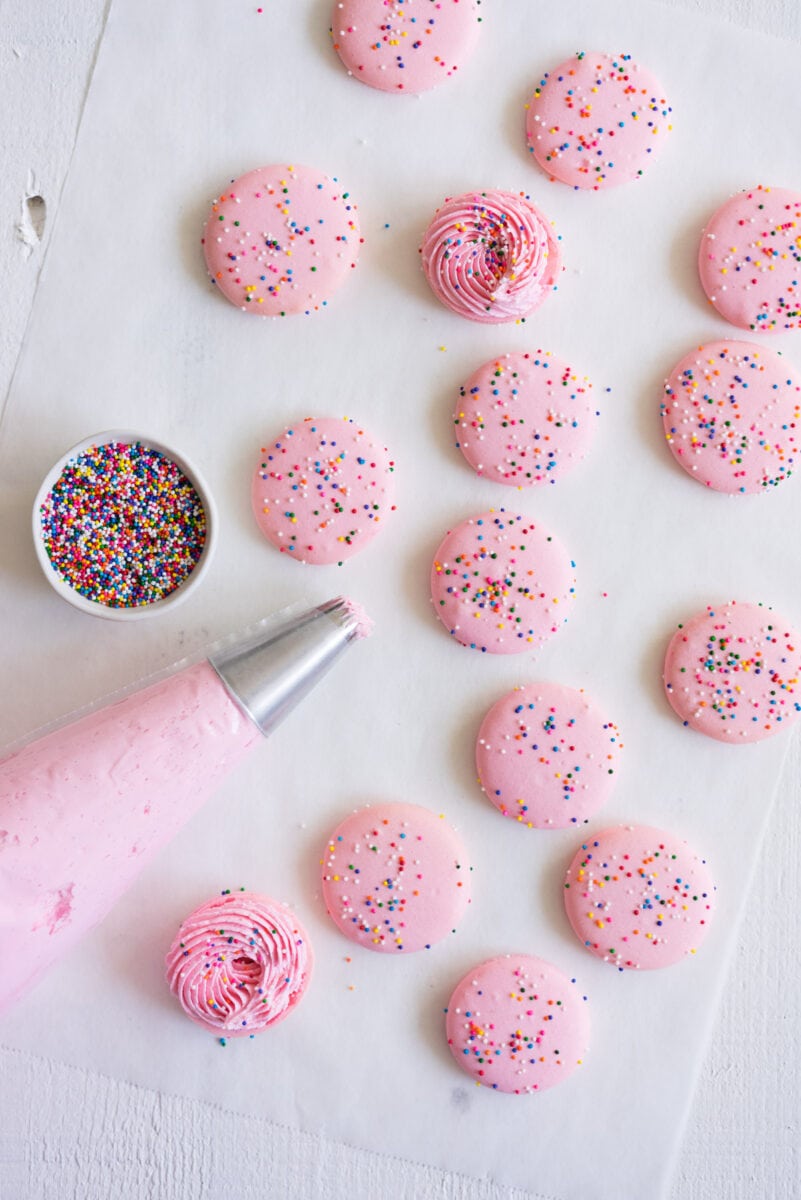 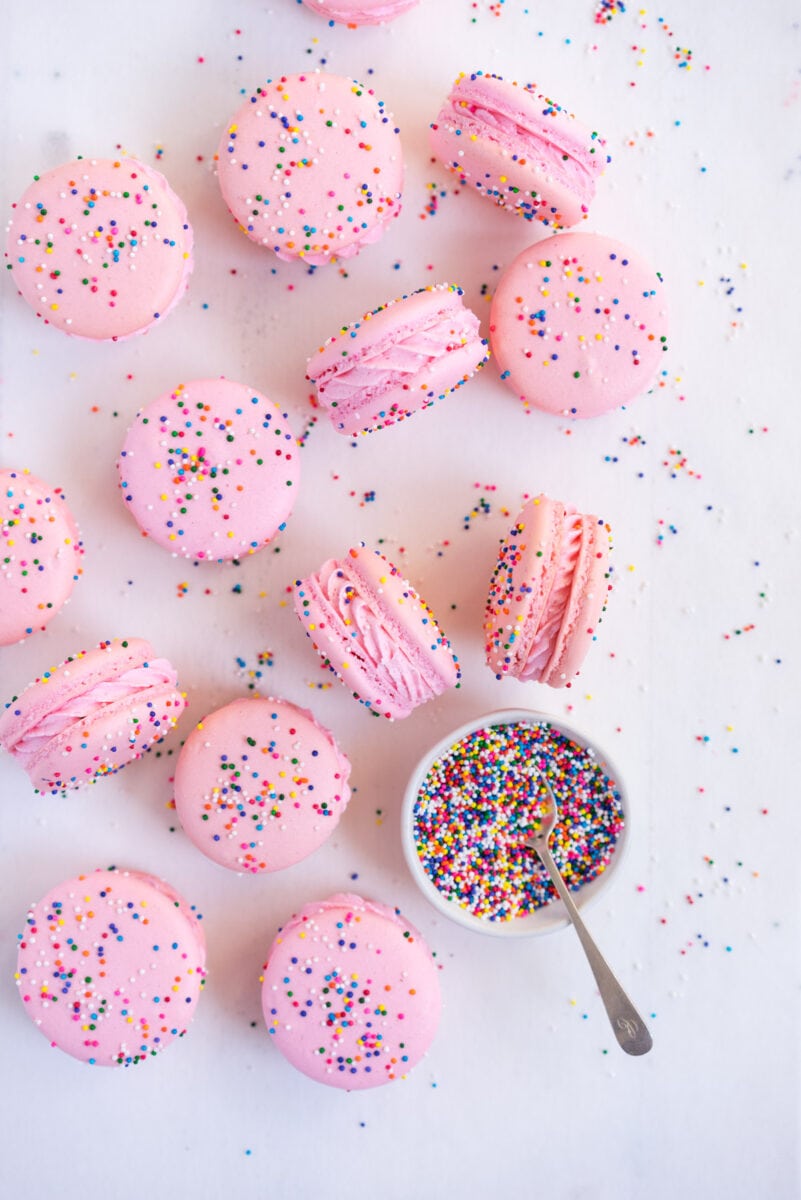 I'm not going to pretend these are easy to make and that I just whipped them up, because they aren't. They are finicky little bastards. Breathe on them wrong and they will fail. Over mix the batter, and they spread everywhere. Don't rest them long enough, and they will crack all over the show. Over whip the meringue, and they will look great, but taste like sweet failure when you bite into one and realise that they are hollow AF. BUT when you nail them, it is an amazing feeling, and you look like a total pro. I just don't mention all the failed batches that came before this one.

However I am hoping that all the disasters I have had in the past (trust me, there's been a lot - if there is a way to fail at macarons, I have done it), will make for a post that can hopefully prevent some of them happening for you! It's important to remember that these ARE tricky, and they do take a little bit of practice with technique and knowing how far to take the batter, but they are fun to make, and once you have them sussed, you should be away laughing. 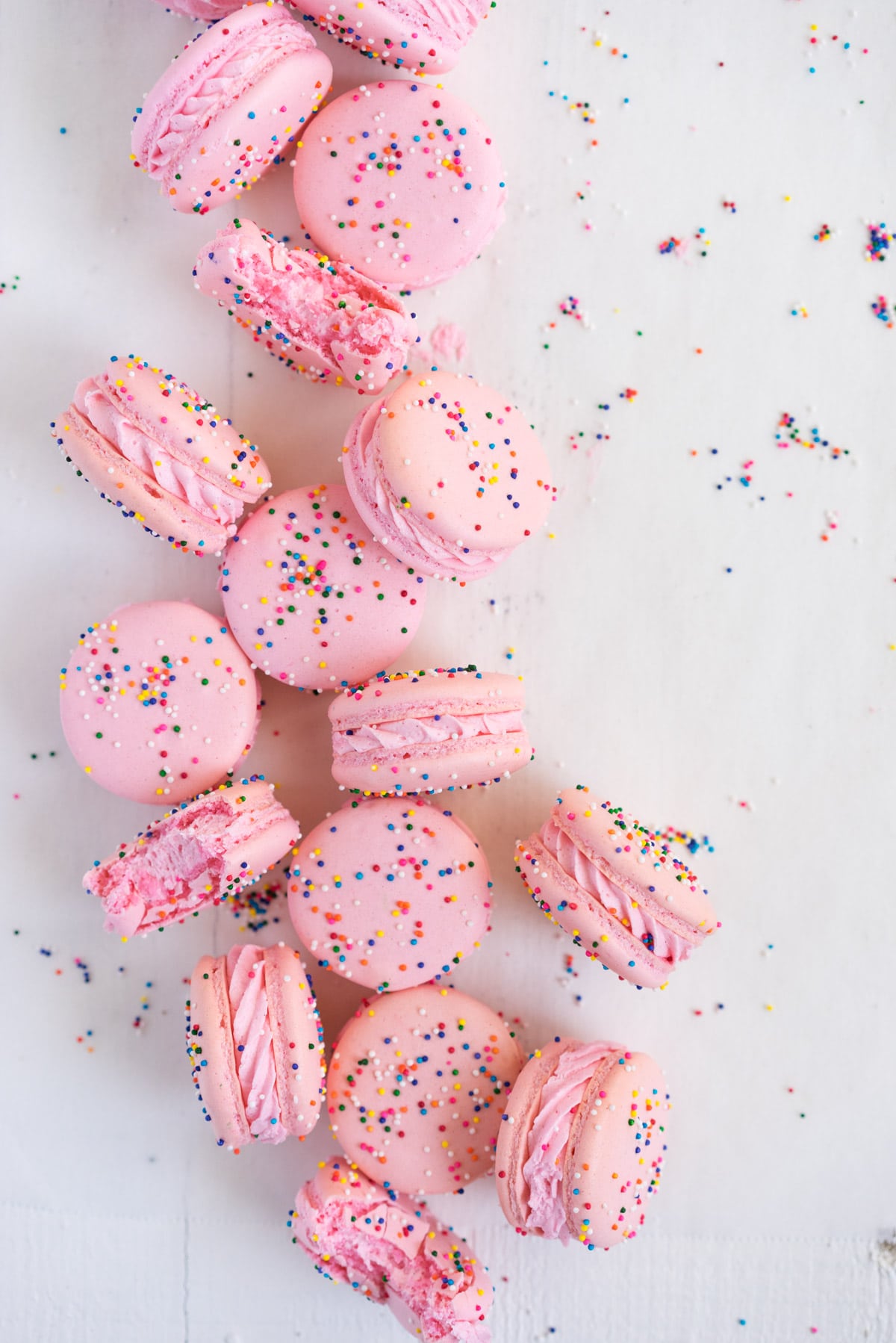 I wanted the first macaron recipe that I posted to be a wee nod to my childhood. These sprinkle French macarons are inspired by a biscuit (cookie) I ate growing up - hundreds and thousands biscuits. They are a vanilla biscuit, covered in a pink icing, and loaded up with hundreds and thousands (nonpareils). They don't really have a distinctive flavour aside from just being sweet, which I think is probably half the appeal. I replicated the biscuit with a pink shell, and added some sprinkles just after I piped them out. I then filled them with an American buttercream, also "pink" flavour.

Usually I wouldn't use an American buttercream in almost any situation. However, the slight crust that it gets is perfect for replicating the texture of the biscuits. So here we have it - a hundreds and thousands macaron! Or, a vanilla macaron, coloured pink, with sprinkles. You decide what to call it. 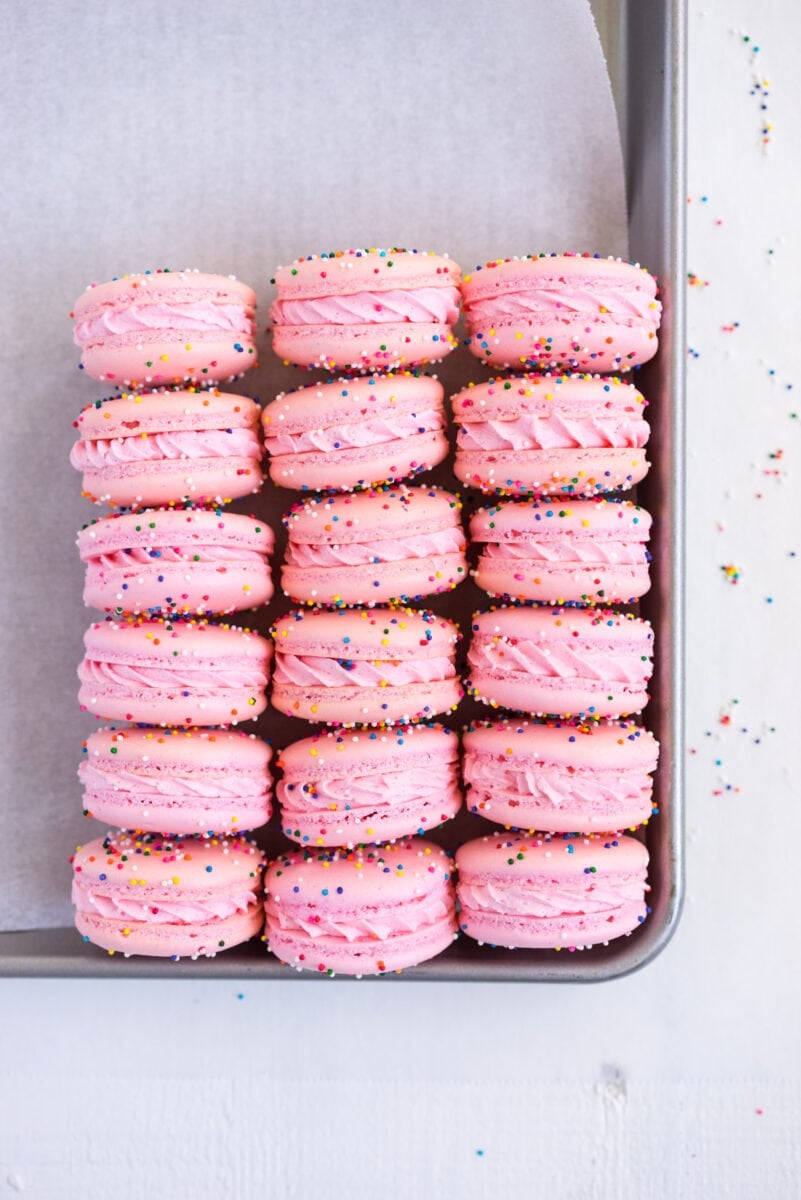 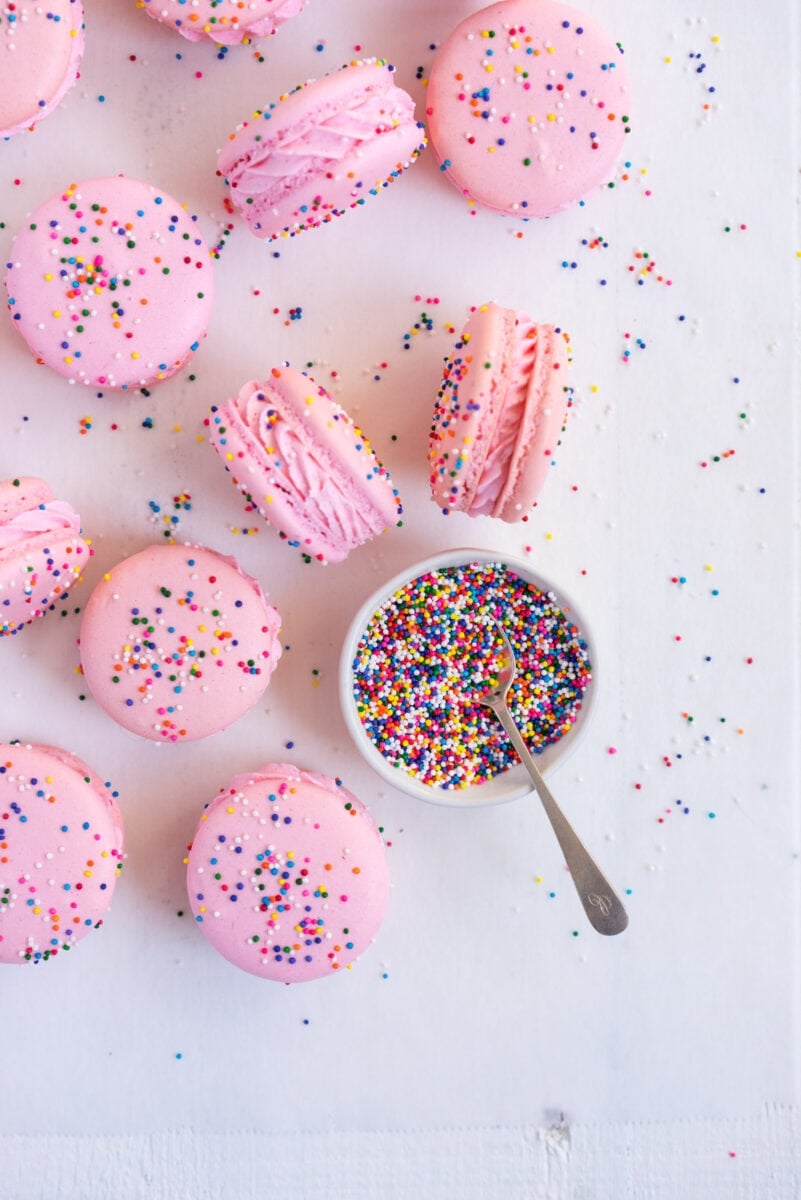 What sort of sprinkles to use for Sprinkle French Macarons

Adding sprinkles to macarons is a super easy way to fancy them up a little. Sprinkle macarons are my absolute favourite to make - I love grabbing whatever is on hand and using it to reflect the flavour of the filling. You do have to be a little selective about your sprinkles. Non-pareils, or what we call "hundreds and thousands" work best. Jimmies (the longer rod sprinkles) tend to melt in the oven, so avoid them. The confetti style round sprinkles work great for sprinkle macarons too as they don't melt in the oven. Avoid anything with sugar balls in it as these will melt in the oven, causing holes in your macaron shells. 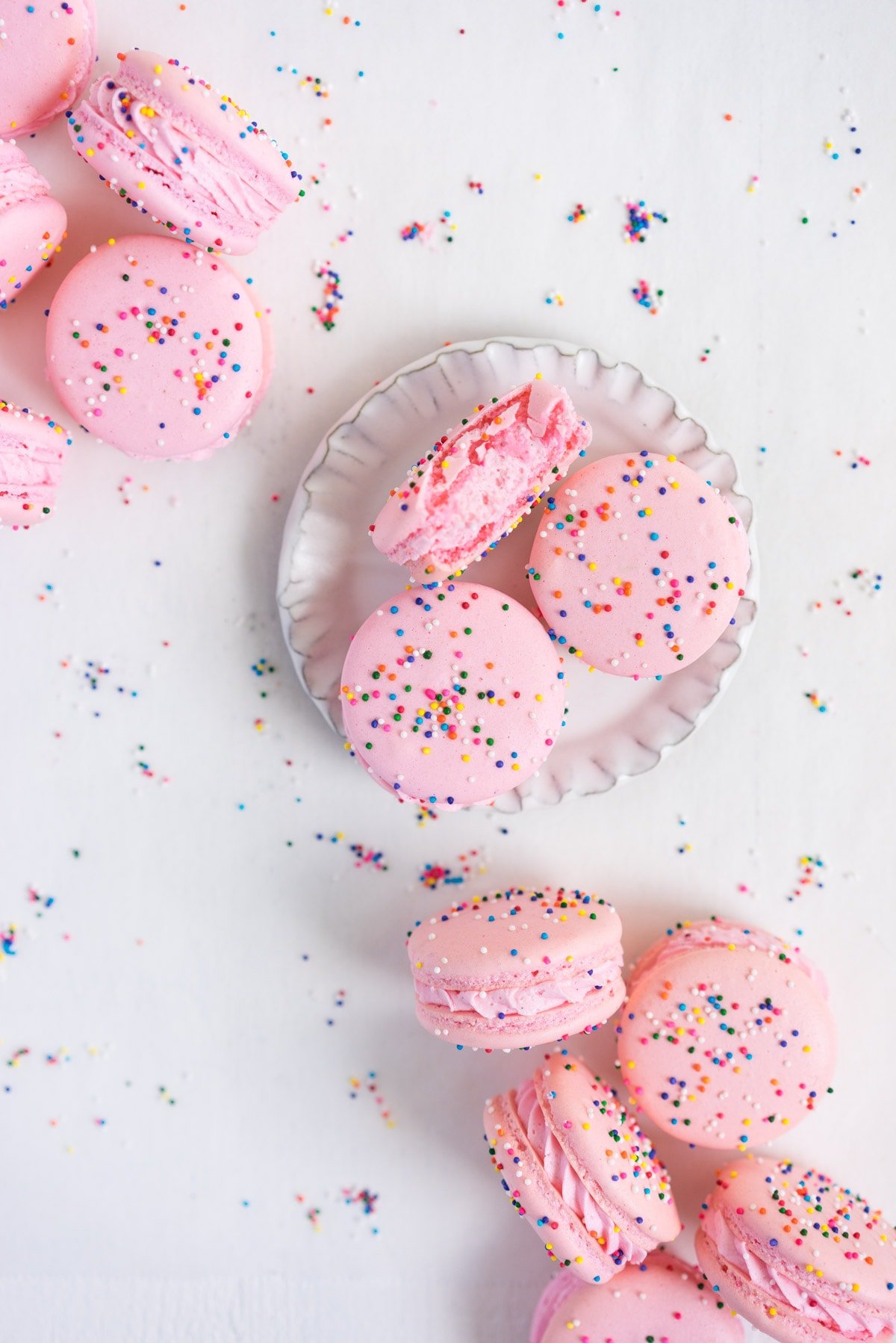 Tips and Tricks for French Macarons 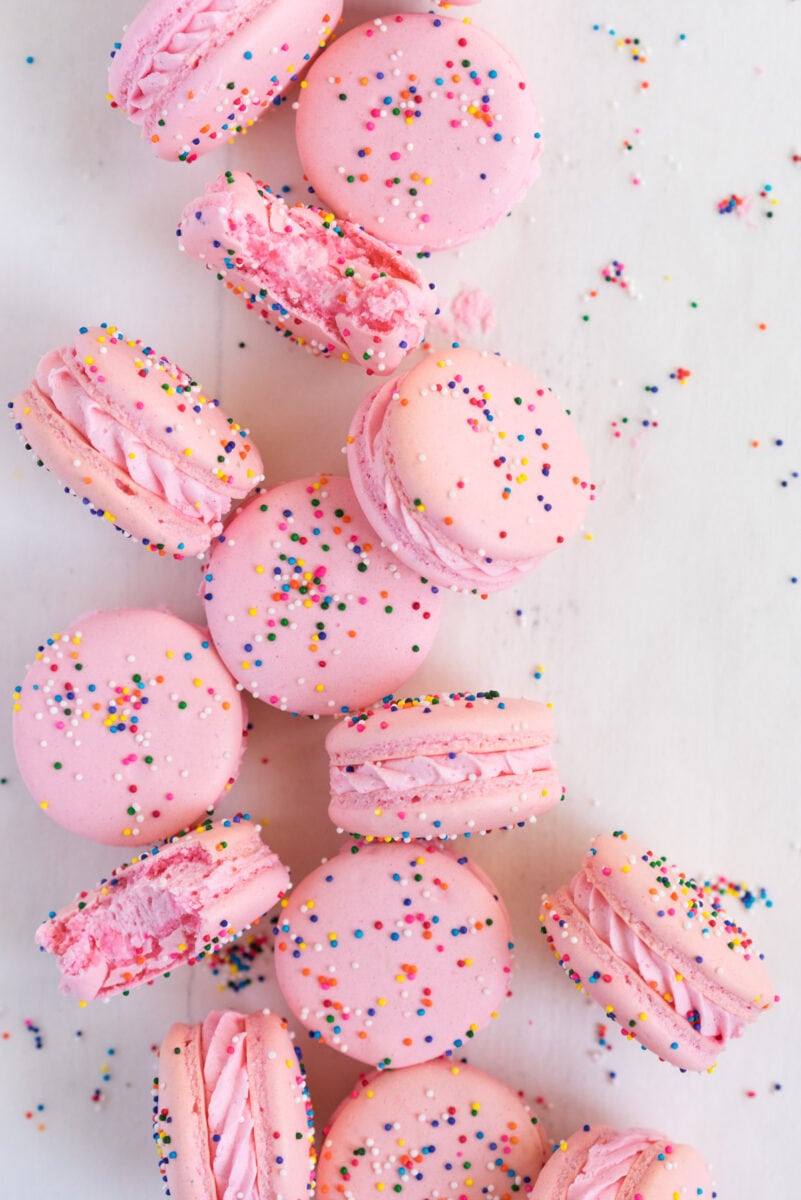 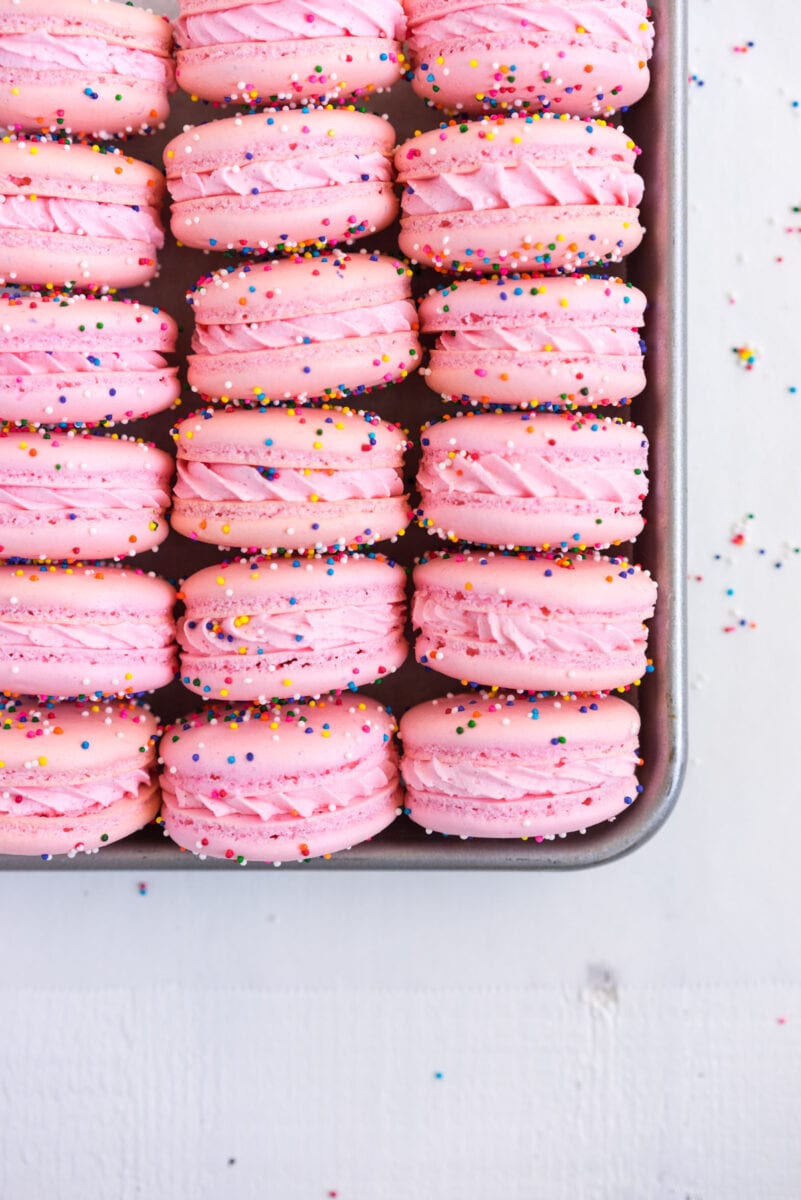 A grown up version of a childhood treat. Vanilla French Macaron shells, sprinkled with hundreds and thousands, and sandwiched with an american buttercream for the perfect nostalgic treat.

Macaron Shell Recipe from I love Macarons, with adaptations from Fox and Crane

I am a huge believer in a solid base recipe. A lot

A quick reminder that you can cut your doughnut do

Hello and welcome to “not quite sure what day it

Hi 💕 if you need a last minute dessert idea or

@mikebakesnyc and I levelled up on cookie boxes th