Hi! Happy Happy Wednesday! Things have been a little hectic around here - we are preparing to shoot our new collection for the studio this Saturday, which is super exciting, but it wouldn’t be shoot prep without a wee bit of last minute running around trying to get everything sorted (currently waiting for an email from a lady about a fig tree). I wanted to quickly pop by and share this recipe before we post our epic Valentine’s day box for tomorrow, because 1. the recipe takes up loads of space, but 2. these are so delicious and cute that I figured they would need their own post so we could really show them off. I’m currently sitting in our fave coffee shop right by Jase’s house - I just left there where we literally just shot these, so this might be a new record for shoot-edit-post.

For our February Macaron recipe we kept it kinda cliche Valentines day with Raspberry and Chocolate. I’m really not a huge Valentines fan, but I can’t resist making a whole heap of pink stuff. We went with a pink shell, which we filled with a dark chocolate Swiss Meringue Buttercream, darkened with a little black cocoa, which turned out to be the most amazing tasting thing ever - all dark chocolate buttercream will have cocoa in it from now on. The inside got a wee dollop of a raspberry quick jam - I made my own, but you can absolutely use a store bought one to save some time!

These Macs were a part of our Valentine’s cookie box, which is coming tomorrow - but they would be perfect on their own, as a valentine’s gift, or just for a little anytime treat.

Preheat oven to 300˚f / 150˚c, and position the oven rack in the centre of the oven. Using a round cookie cutter or the base of a large piping tip (something about 1.5 inches in diameter), draw a "template" for your macarons on a piece of parchment paper, leaving about 3/4" between each circle.

Combine the almond meal and powdered sugar together in a large bowl. Sift the mixture twice, to ensure there are no large lumps and that the mixture is properly aerated. Set aside.

In the bowl of a stand mixer fitted with the whisk attachment, whip the egg whites on medium speed until foamy. Gradually add the sugar, increase the mixer speed, and whip on high until the meringue starts to firm up. Add pink gel food colour a few drops at a time, until the desired colour is reached. Add one very small drop of black if desired to deepen the colour. Add vanilla and mix until incorporated. Continue to whip until the meringue forms stiff peaks (there is a good example here).

Add the remaining ground almond mixture, and stir lightly to combine. Now comes the important part - mixing the batter to the correct consistency. Again, this video does a good job of explaining it. Fold the mixture in a series of 'turns', deflating the batter by spreading it against the side of the bowl. Turn the bowl slightly and repeat the movement - scooping the batter from the bottom of the bowl, and spreading it against the side. Continuously check the consistency of the batter - you want it to flow like lava when you lift the spatula from the bowl, and you should be able to 'draw' a figure 8 with it, without the batter breaking (again, watch lots of videos to get an idea! They help so much). This step can take some practice until you know what it should feel and look like. If in doubt you are better to under mix them than over mix them - the process of putting the batter into the bag and piping out will help mix a little too.

Fit a large pastry bag with a medium sized round tip, such as an ateco #805. Place the macaron template on a sheet pan, and place a second piece of parchment over it. Holding the piping bag at a 90˚ angle to the surface, pipe out the batter into blobs the size of the circles drawn on the template. Finish off each piped circle with a little "flick" of your wrist to minimise the batter forming a point (it will still form a small one, but we can get rid of this with banging). Remove the template from under the macarons.

Hold the baking sheet in two hands, and carefully but firmly, evenly bang it against the bench. Repeat this a few more times - this will get rid of any air bubbles, remove points on the top, and help them to spread out slightly.

Repeat the piping and banging process until you have used up all of the batter - I usually make three sheet pans worth.

Allow the macarons to dry at room temperature for approximately 30 minutes, or until they form a skin that you can touch without your finger sticking to them. This time will drastically vary depending on the humidity.

Bake for approximately 18 minutes, rotating the pan once during the cooking process, and checking for doneness after 15 minutes. The macarons should develop a foot (the ruffled part on the bottom of the macaron), and bake without browning. To see if they are done - press down lightly on a shell. If the foot gives way, it needs a little longer, if it is stable, then it is close to being done. Test a macaron shell - if you can peel it away cleanly from the paper, they are done. If they are stable but cannot yet peel away cleanly, give them another minute or so. Again, this part takes a little trial and error depending on your oven. If they seem done but do not peel away cleanly, do not worry - there is a little trick for that!

Remove from the oven, and allow to cool on the sheet pan for 10 minutes before peeling off the parchment paper and allowing to cool completely on a wire rack. Repeat the baking with the remaining trays, using the same spare sheet pan to double up.

If your macs do not peel away cleanly, place them, on the parchment paper, into the freezer for 5-10 minutes, then peel away from the paper.

Store cooled macarons in an airtight container until ready to use.

In a medium heavy-bottomed saucepan, mash the raspberries roughly. Bring to a rolling boil, and then add the sugar. Cook for 3 minutes, stirring occasionally. Transfer to a container or sterilised jars, and allow to cool completely before using. Store in the fridge.

Place the egg whites, sugar and salt in the bowl of a stand mixer or a heat proof bowl. Place over a pot of simmering water, ensuring that the water does not touch the bowl. Heat, whisking constantly, until the mixture registers 160˚f / 70˚c on a thermometer and the sugar has dissolved. Carefully transfer the bowl to the mixer, and fit with the whisk attachment. Whip the egg whites on high until they are snowy white and fluffy, 8-10 minutes. Add the butter one chunk at a time. The mixture may look curdled - but just keep mixing! Once all the butter is incorporated, mix on high for a further 10 minutes. Add the vanilla and mix until incorporated.

While the buttercream is mixing, melt the chocolate in a small heatproof bowl in 30 second increments in the microwave. Set aside to cool slightly.

Once the buttercream has finished mixing, and is smooth and silky, add in the cooled chocolate, and sift in the cocoa. Mix for a further 2-3 minutes, then switch to the paddle attachment and mix on low for one minute to remove any air. Transfer to a piping bag fitted with a round tip (we used Ateco #805).

Place the raspberry jam into a small piping bag fitted with a round tip. Pair up each macaron shell with another of an equal size. Pipe a ring of buttercream on one half of the shell, then a blob of the compote in the middle. Place the second shell carefully on top. Repeat with the rest of the macarons. Macarons are best chilled overnight to allow the flavours to meld, but can also be eaten immediately. 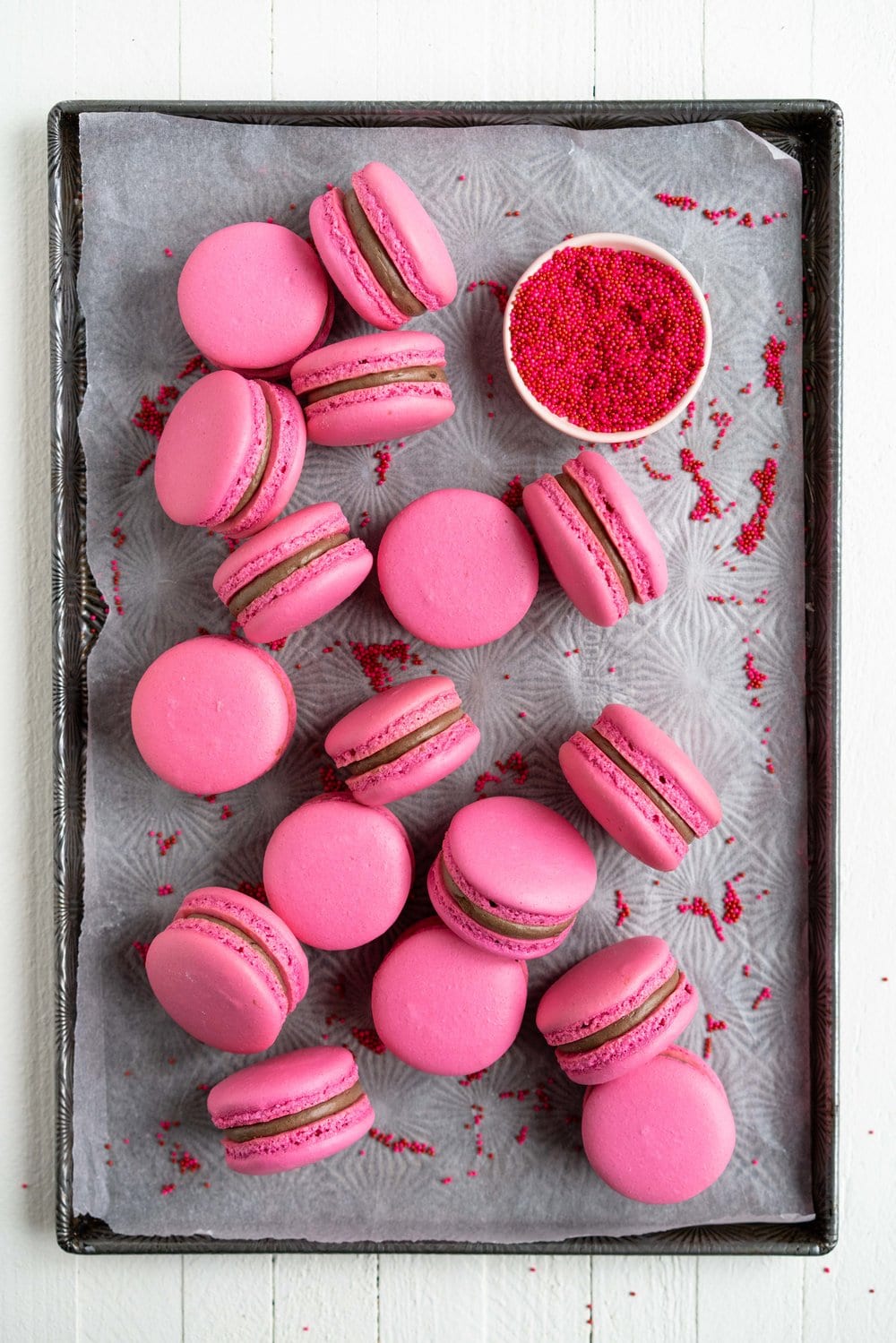 Happy Tuesday! Friendly reminder that the tahini b

Pumpkin chocolate chip bars are on the blog! This