I just checked, and I haven’t posted a layer cake in the LONGEST time. Like, in almost a year. Whoopsies. Hopefully posting a super extravagant one will make up for it? Anyway, I don’t intend on leaving it that long again, because I forgot just how fun making layer cakes can be.

This has to be one of the best cakes I have ever made. I took a bunch of my favourite things, and combined them into one perfect (to me) cake. Fudgy brownie cake layers, sandwiched with chocolate hazelnut filling, and a silky mocha German buttercream. I finished it with some fancy gold leaf and buttercream stripes (more on that new technique later), and what has become somewhat of a signature move from me - some french star tip piping. The flavours compliment each other perfectly - the chocolate hazelnut filling is so delicious against fudgy cake layers and silky silky mocha German buttercream. If you haven’t tried German buttercream you should - I love that you can infuse it with whatever you like, in this case some strong coffee. I whipped some melted chocolate into it, and it became almost like room temperature ice cream - silky and amazing. So tempting to eat with a spoon, but even more magical layered into the cake.

It only made sense to then pop it on my favourite cake stand - made by the lovely Amy from Aheirloom. We have been good friends for a while now, and it’s amazing having someone to bounce ideas off and complain about the internet with. The stand I used here is one I’ve been looking forward to for the longest time - the cake plate is 8” in diameter, which makes it perfect to pop 6” cakes on. To kick off the new year, we are giving away two of these cake stands, one here and one over on Instagram! All you have to do is make sure you are following both Aheirloom and I on Instagram, then leave a comment letting me know your favourite type of cake! Competition is open until Friday 25th of January at 8pm EST, and is open to US residents only. Happy caking! x

In a small saucepan over medium heat, heat the butter and chocolate, stirring constantly, until melted and combined. Set aside to cool.

In a small bowl, whisk together the flour, cocoa powder, baking powder, and salt.

In a large bowl, whisk together the sugar, dark brown sugar, eggs, vanilla, and oil. Add the cooled chocolate mixture, and mix to combine. Add the dry ingredients, and gently fold to combine.

Divide the batter between the three cake pans, and bang once or twice on the counter to help settle.

Bake for 25 to 30 minutes, checking for doneness after 20 minutes, until a the top of the cakes are set, and skewer inserted in the middle of the cake comes out with a few crumbs attached.

Cool in the tins for 10 minutes, then turn out onto a wire rack and allow to cool completely. If you are making ahead, once cool, wrap tightly in plastic wrap and store in the fridge until you are ready to assemble the cake.

Preheat the oven to 350˚f / 180˚c. Place the hazelnuts on a baking sheet. Roast in the oven, shaking occasionally, for 8-10 mins, checking often, until the are golden brown. Allow to cool completely, then rub between your hands to remove the skins. Do not worry about any stubborn skins. Transfer to the work bowl of a food processor, and pulse briefly to chop.

Add the melted dark chocolate, sugar, and salt. Pulse to combine, then mix on high speed for at least five minutes. Check, and give more time mixing if needed. Transfer to a container and store at room temperature until you are ready to use.

In a medium saucepan, heat the milk to just shy of a simmer.  Remove from the heat, add the coffee, stir well, and steep for 20 minutes. Strain through a very fine mesh sieve, and re-weigh the infused milk and top up to 375g. Wipe out the saucepan, and return to the milk mixture to the heat. Bring to just shy of a simmer. Meanwhile, In a bowl, whisk together the vanilla, corn starch, sugar, egg, egg yolk and salt.

Fit your mixer with the whisk attachment, and place the pastry cream in the bowl. Whip the mixture on medium until creamy and lump-free. Begin adding the butter, a few cubes at a time, until fully incorporated. It may look curdled at some point but just keep whipping - it will come together! Whip for a further 2 minutes.

If the cakes domed in the oven, level them a little with a sharp bread knife. Transfer some of the mocha buttercream to a piping bag fitted with a medium round tip - this will be used to make a buttercream dam to hold in the chocolate filling between layers.

Secure one of the layers of cake to a cake turntable using a little buttercream. Add about half a cup of mocha buttercream onto the first layer of cake, and smooth using an offset spatula. Create a buttercream dam using the buttercream in the piping bag by piping a ring of frosting around the outside edge of the first layer. Fill in the ring with approximately 1/3 cup of the hazelnut filling. Place the second layer of cake onto the first, pressing very lightly to secure, and sealing the joins with a thin layer of buttercream. Repeat the layering process - add half a cup of buttercream, make a dam, fill with 1/3 cup hazelnut filling, then top with the third layer of cake - I like to put this one upside down to ensure that the top of the cake is flat.

Crumb coat the cake - to do this, apply a thin layer of buttercream over the surface of the cake, and smooth with a bench scraper or icing smoother. Refrigerate the cake for 30-45 minutes, until the crumb coat has set.

To ice without stripes (see notes): Cover the cake with a second, thicker layer of mocha buttercream. Smooth. Decorate as desired.

To ice with stripes: (see this highlight for more details / photos) Apply a thick layer of buttercream, and smooth completely, ensuring that there are no holes and it is completely smooth. Chill 15 minutes. Using a warmed icing comb (run under hot water then dry), go around the cake, creating grooves in your buttercream. Make sure that the grooves are sharp edged and deep - you may have to do a few passes to ensure this.

Add gold leaf to the cake where desired, then pipe blobs of buttercream randomly over the surface of the cake, as desired.

Chill cake until ready to serve, then bring out of the fridge to come to room temperature about an hour before you serve. Store leftovers in an airtight container in the fridge. 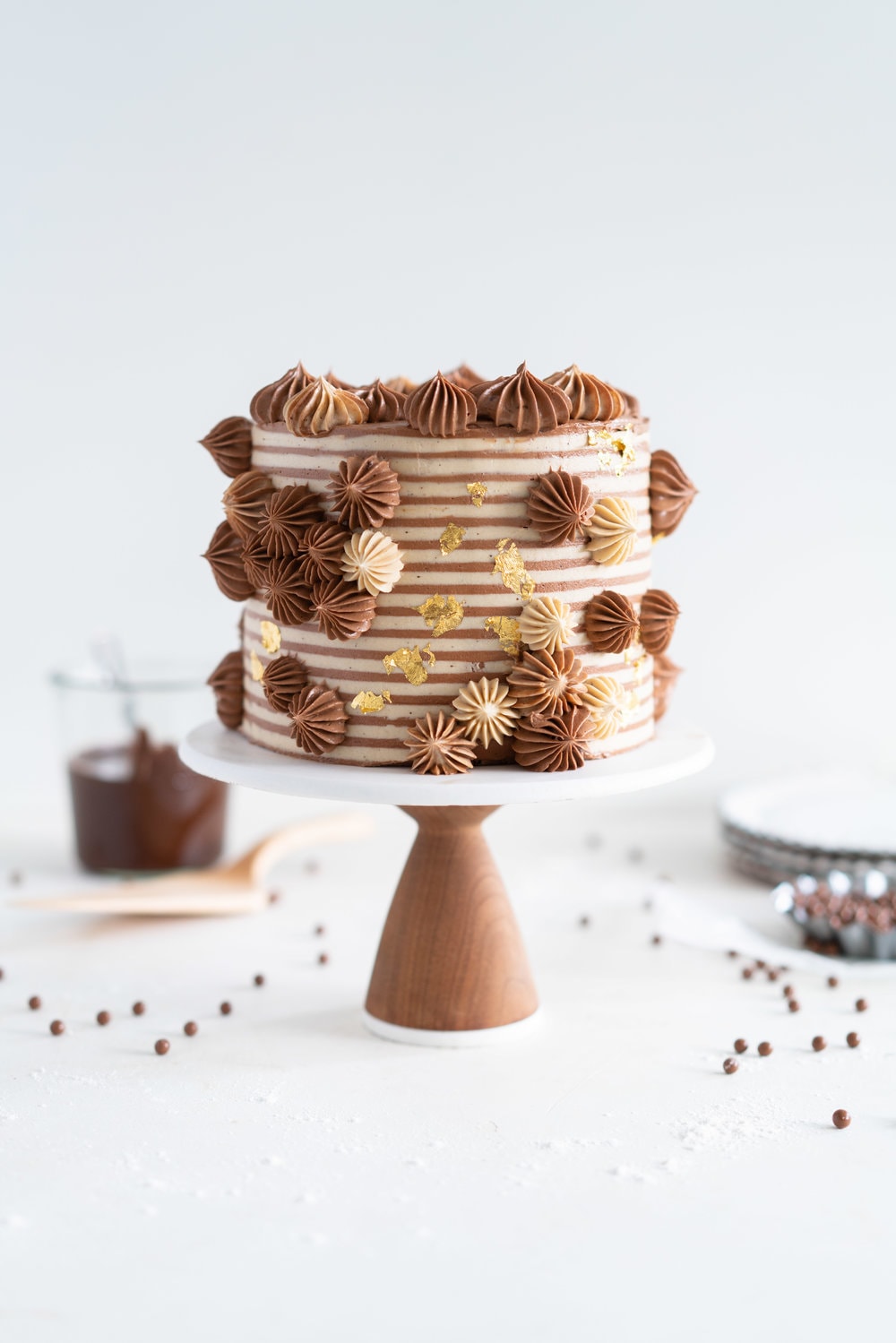 I took my “perfect” (to me, anyway) chocolate