Hi! Happy happy Friday! Just popping by with a quick doughnut recipe which I made earlier this week - a take on a banoffee pie, but as a doughnut. Banoffee pie gets its name from “banana toffee” - it was my favourite thing to make when I was younger using a can of caramel condensed milk and some crushed biscuits and cream. We used to make it in the halls of residence when I was at university because it was no bake situation and we could put it together in a tin foil baking dish. Definitely very rustic, but so, so good.

I stuck with my regular brioche fried doughnuts, then I played up the banoffee vibe by making a banana salted caramel ganache to fill the doughnuts. The recipe came from my friend Lisa, who suggested that rather than making a caramel and then also stuffing in the banana, I incorporate the banana right into the caramel itself. It wasn’t a concept I had heard of before, but I gave it a go, and oh my, I love how it came out. Incorporating in the banana means that the banana flavour is super strong, and also helps cut through the sweetness of the caramel. I poured the finished caramel over some white chocolate to form a ganache and to help add some thickness, and it makes the most perfect doughnut filling - all the flavour of banana and caramel and no having to deal with slimy bananas.

I finished these off with a chunk of my favourite candy to make - honeycomb, or hokey pokey as we call it in New Zealand. It’s sugar and golden syrup cooked together, and then baking soda is added at the very last second to make it foamy and delicious. It’s super fun and easy to make, and so, so delicious. I just popped a chunk on the top of each doughnut to give a little textural element. It’s totally an optional step, but a fun and delicious one. Happy Doughnutting!

For Frying
Neutral oil such as canola or vegetable oil
150g sugar, for rolling doughnuts

Place the sugar in a medium saucepan, and place over medium heat. Heat the sugar, stirring occasionally with a whisk, until all of the sugar has melted (the sugar will clump as you heat, but continue to stir - it will soon smooth out). Continue to cook the caramel until it is amber in colour and just beginning to smoke slightly.

Add the chopped bananas and return to the heat, and cook for 2-3 minutes, until the bananas have softened. Remove from the heat and carefully blend using an immersion blender, or transfer to a high speed blender and blend until smooth (take care to leave the lid ajar a little to account for the hot liquid so it doesn’t explode).

Place the chopped chocolate into a heatproof bowl. Pour the hot salted caramel over the chocolate and cover with a plate. Leave to stand for 3 minutes to melt the chocolate, and then emulsify with the immersion blender.

Transfer the ganache to an airtight container, and refrigerate until chilled and thickened.

In a small bowl, combine the yeast, milk and 2 Tbsp of the sugar. Mix well, and leave to sit for 10-15 minutes, or until foamy.

In the bowl of a stand mixer fitted with the dough hook, combine the flour, salt, and remaining 2 Tbsp sugar. Mix briefly to combine. Add the eggs, vanilla, and foamy yeast mixture to the bowl. Mix on low for 2-3 minutes, until the dough is starting to come together. It may look slightly dry but do not worry - it will mix together nicely in the next steps. Increase the mixer speed to medium, and mix for another 10 minutes, until the dough is soft and smooth.

Transfer to an oiled bowl, and cover tightly with plastic wrap. Place in a warm spot until doubled in size, approximately 1 - 1 ½ hours. Alternatively the first rise can be done overnight in the fridge.

Turn the dough out onto a well floured surface. Weigh the dough, and divide into 12 equal weight portions. If you would like to make smaller doughnuts, divide into 16. Roll each portion into a tight ball. Place the rolled doughnuts on a baking tray sheet with parchment paper, leaving adequate space between (you may need two baking sheets).

Leave the doughnuts to proof for a further 20 minutes. When you poke them lightly with your finger, it should leave a small indentation that springs back.

While the doughnuts are proofing, heat the neutral oil in a large heavy-bottomed pot (cast iron works great), or in a deep fryer. Heat the oil to 350°f / 180°c. Place a wire rack over a baking sheet lined with parchment paper. Place the sugar in a shallow bowl.

Once the oil has come to temperature, test it with a few scraps of dough. Gently lower the doughnuts, two at a time, into the hot oil. Cook , flipping every 30 seconds, for 3-4 minutes, until golden brown. Remove from the oil using a slotted spoon and place on a cooling rack. Allow to cool for 30 seconds before tossing in the sugar. Repeat the process with the rest of the doughnuts. Once the doughnuts are totally cool, poke a hole in them using a chopstick, and widen the hole using your finger.

Line a baking tray or loaf pan (see notes) with parchment paper or silpat. Measure out baking soda into a ramekin. In a small pot, over medium heat, combine sugar and golden syrup. Heat until the sugar has dissolved. Bring to the boil, and boil for two minutes, stirring occasionally. Remove from the heat and add baking soda and quickly stir to incorporate. Mixture will become very frothy. Pour out onto prepared tray. Leave to harden. When set, cut into small pieces. Store in an airtight container.

Transfer the chocolate ganache to a piping bag filled with a round piping tip. Fill each doughnut with the ganache - you will feel it become heavy in your hand, and will begin to come out the top a little. Pipe a small blob of ganache on the doughnut where the filling pokes out. Top with a piece of honeycomb.

Doughnuts are best served on the day that they are made. 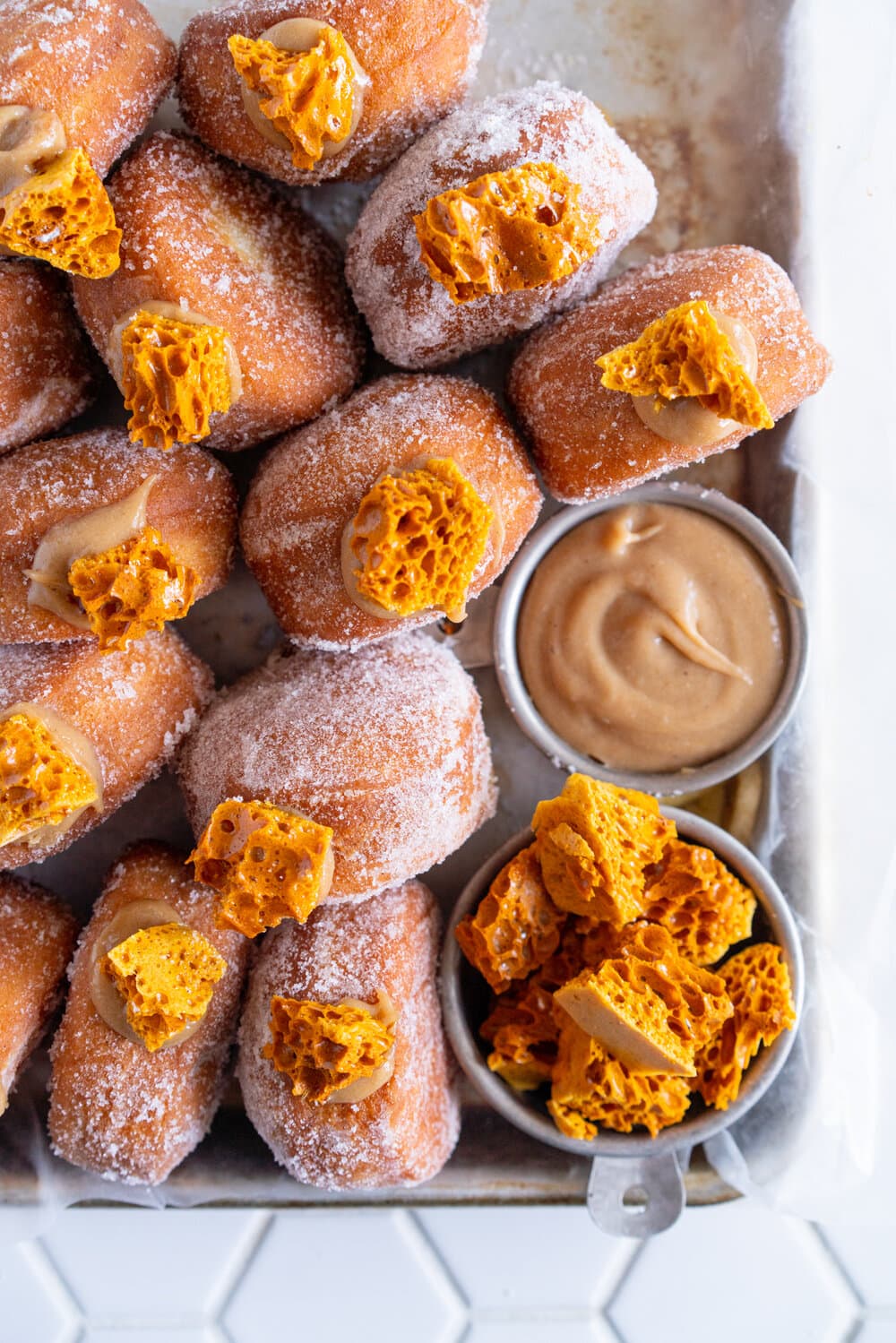 Here’s a fun fact for you: in New Zealand, TV a

Easter is sneaking up on us.... I gave my classic

If you know, you know. My chocolate crackle recipe

Hi hi 💕 there’s a carrot cake loaf on the blo

Hi 💕 I don’t have any new St Patrick’s day