Happy nearly 4th of July! Summer is in full swing round here, which means that it’s super hot and sweaty, but it also means that it’s prime stone fruit season! Peaches have just started to pop up at the market, which I am super excited about, as they are one of my absolute faves. I love them fresh, but also can’t resist them tucked into a hand pie, thrown onto the grill and served with ice cream, or in this case, roasted up and added to a Quark ice cream pop!

If you haven’t heard of Quark before, now is the time to try it. I have had it in New Zealand before but hadn’t come across it here until recently, via Wunder Creamery! It is a cultured milk product similar in texture to greek yoghurt, but without as much tanginess. I love it - it is thick and smooth, and perfect for both sweet and savoury applications. I’ve got a couple of tubs stashed in my fridge leftover from this project and mixed some with some peanut butter the other day to make a wee dip. Baking wise it’s the dream ingredient - it has the thickness and richness of yoghurt but because it doesn’t have as much tang, it’s perfectly mild so super versatile. I’ve been using it in the place of yoghurt or sour cream in a few recipes and love how it performs! Wunder Creamery is based in upstate New York using grass-fed milk from family owned farms. As someone who grew up on the good stuff (if you’ve ever had any dairy products from New Zealand you will know what I mean), I was so excited to try this, and it most definitely passed the test!

It also worked so, so perfectly in this recipe as a base for these ice cream pops! I roasted up some peaches and pureed them, then stirred it through a quark based mixture before churning it in my ice cream machine and setting it in a pop mould. I kept the base simple - I added some heavy cream to help thin the mixture out and bump up the fat content a little to avoid ice, a tiny bit of sugar for sweetness, some vanilla bean, and some honey, which I found paired so well with the quark. Frozen Yoghurt / Quark based ice cream bases can potentially turn a little icy, so adding an invert sugar (either honey or corn syrup or golden syrup) helps to prevent the formation of the ice and keep the mixture nice and smooth.

The roasted peach pops were delicious plain, but I couldn’t help adding a little something to them, so I dipped them half way in a white chocolate dip, then loaded up the dipped half with a brown butter streusel. Streusel is one of my favourite things to add, and browning the butter and then also baking the streusel really helps to add another dimension of flavour, while also giving you a nice crunch on the outside of the pop. You definitely don’t have to add the chocolate dip and streusel if you don’t want to, but I highly recommend. I usually end up making a double batch of the streusel to add to other things!

Preheat the oven to 425˚f / 220˚c. Line a sheet pan with parchment paper. In a medium bowl, combine the peach segments, sugar, vanilla bean paste and salt, and toss to combine. Spread evenly over the baking sheet, and bake for 30 minutes, until the peaches are soft and beginning to caramelise. Allow to cool on the pan before removing the skins from the segments, then blend on high speed using a blender or stick blender. Chill until ready to use.

Whisk together all of the ingredients except for the peach puree. Transfer to an airtight container and chill for 2-3 hours.

Whisk in 400g of the peach puree, and then churn according to the manufacturer’s instructions on your ice cream maker. Divide between the ice cream pop moulds. If there is extra ice cream left over, leave to set in a small container.

Smooth off the moulds using an offset spatula. Add sticks. Place the moulds onto a sheet pan and freeze until solid, ideally overnight.

Place the butter in a small pan, and place on the stove over medium heat. Heat, stirring occasionally, until the butter has melted. Continue to cook, until the butter begins to foam, smells nutty, and goes a deep golden brown colour. Remove from the heat and place in a medium heatproof bowl. Add the remaining ingredients, and mix well to combine. Using your hands, break up any large lumps. Spread evenly over the baking sheet, and bake until lightly golden and toasty, 10-15 minutes. Remove and allow to cool completely before storing in an airtight container.

Create a double boiler by placing a heatproof bowl over a pot of simmering water. Do not let the bowl touch the water. Place the white chocolate and the neutral oil in the bowl, and stir well, heating until the mixture is smooth and cohesive. Remove the bowl from the pot, ensuring no water gets into the mixture, and set aside to cool to 37˚c / 98˚f. Transfer to a narrow jar or glass which is wide enough and deep enough to dunk your ice cream pops.

Place a sheet pan lined with a silpat or baking paper into the freezer. Carefully unmould the ice cream pops, and place back into the freezer while you prepare and cool the white chocolate dip.

Place the streusel in a bowl, and place a piece of parchment paper down to catch excess streusel.

Working with one at a time, dip an ice cream pop into the jar of the white chocolate dip, so that half of it is dipped. Immediately remove the pop from the dip, allow a little excess to drip off, then sprinkle the chocolate dipped section liberally with the streusel. Place onto the sheet pan in the freezer.

Repeat with the remainder of the pops.

Store in an airtight container in the freezer until ready to serve. 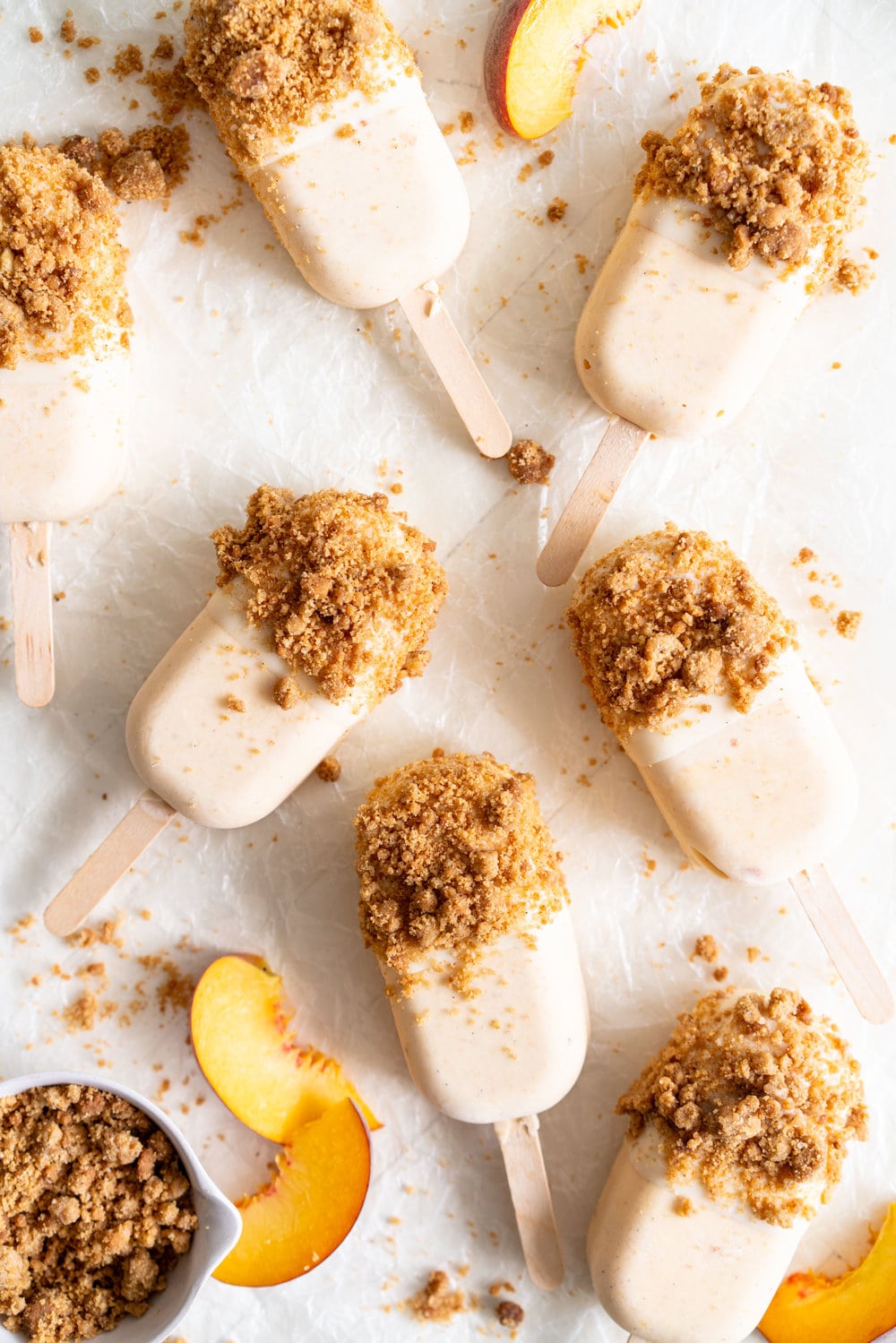 Thank you so much to Wunder Creamery for sponsoring this post! All opinions are my own.

Here’s a fun fact for you: in New Zealand, TV a

Easter is sneaking up on us.... I gave my classic

If you know, you know. My chocolate crackle recipe

Hi hi 💕 there’s a carrot cake loaf on the blo