Every now and then I come across an ingredient that is a total game changer. Flaky sea salt, caramelised white chocolate, bergamot extract to name a few. And black cocoa. I first baked with black cocoa a couple of years ago, and was instantly hooked. If you haven’t heard of black cocoa, or used it before, it is essentially cocoa powder that has been super dutched - or super alkalised (the process of making dutch cocoa). It’s what is used in Oreos, and has somewhat taken off as a popular ingredient within the baking world. Something super interesting about cocoa is that regular cocoa powder is acidic, so will react with baking soda to provide lift in baked goods, whereas dutch cocoa or black cocoa has been made basic, so will need to have baking powder in the recipe to give the rise - baking powder is heat activated whereas baking soda needs to react with an acid to create carbon dioxide to rise baked goods. Science!

The most recent thing I made with black cocoa was this black cocoa brownie, which I loaded up with an Oreo German buttercream. The Brownie is ever so slightly adapted from Sarah Kieffer’s book, which is one of my absolute favourites to use for base recipes. Sarah makes her brownies in a 9” x 13” (which I sometimes do too, and it makes the most beautiful crackly top and fudgy brownie), but I made this one in a 9” pan to make it a teeny bit thicker, and subbed the cocoa for black cocoa to give it an oreo taste. I highly suggest making this, but I also highly suggest getting Sarah’s book and making the original - they are some of the best brownies I’ve ever had, and the other recipes in the book are also crazy amazing.

I topped the brownie with an Oreo German buttercream. German buttercream is one of my absolute favourites, and the one I turn to the most - it is silky and not too sweet, and the taste of the butter is mellowed out by the pastry cream base. You can infuse the pastry cream with whatever you like (eggnog buttercream coming at you tomorrow!!), so it is extremely versatile. I made a regular vanilla buttercream, then whipped in some ground Oreo cookies. I loaded it up onto the brownie, and then topped it with some flaky sea salt (the best sprinkles IMO), and some more chopped Oreos. While it takes a teeny bit more work than the standard brownie, I love that it is a wee twist on traditional chocolate brownie. If you aren’t down for making the buttercream, the brownie is also perfect just as it is, or even more perfect with a giant scoop of vanilla bean ice cream. Enjoy! x

Melt together the butter and chocolate in a medium pan over low heat, stirring well until smooth. Add the cocoa powder and mix well to combine, then set aside to cool.

Whisk together the flour, baking powder, and salt in a small bowl. In a large bowl, combine the eggs, oil, sugar, brown sugar, and vanilla. Mix until well combined. Add the chocolate mixture and mix until combined. Gently fold in the dry ingredients until just combined.

Transfer the mixture to the prepared baking tin. Bake for 30 to 35 minutes, until the top of the brownie is set and a skewer inserted comes out with still a few crumbs attached. Remove from the oven and allow to cool completely.

In a bowl, whisk together the sugar, corn starch, egg, egg yolk and salt. In a medium saucepan, heat the milk and vanilla to just shy of a simmer.  Remove from the heat.

Fit your mixer with the whisk attachment, and place the pastry cream in the bowl. Whip the mixture on medium until creamy and lump-free. Begin adding the butter, a few cubes at a time, until fully incorporated. It may look curdled at some point but just keep whipping - it will come together! If you are having issues with it coming together, see notes. Add the Oreo crumbs and mix until combined.

Using an offset spatula, spread the Oreo buttercream over the surface of the brownie, adding swoops as desired. Top with flaky sea salt and extra Oreo pieces. Slice using a sharp knife, wiping the blade between each cut.

Store leftovers in an airtight container. 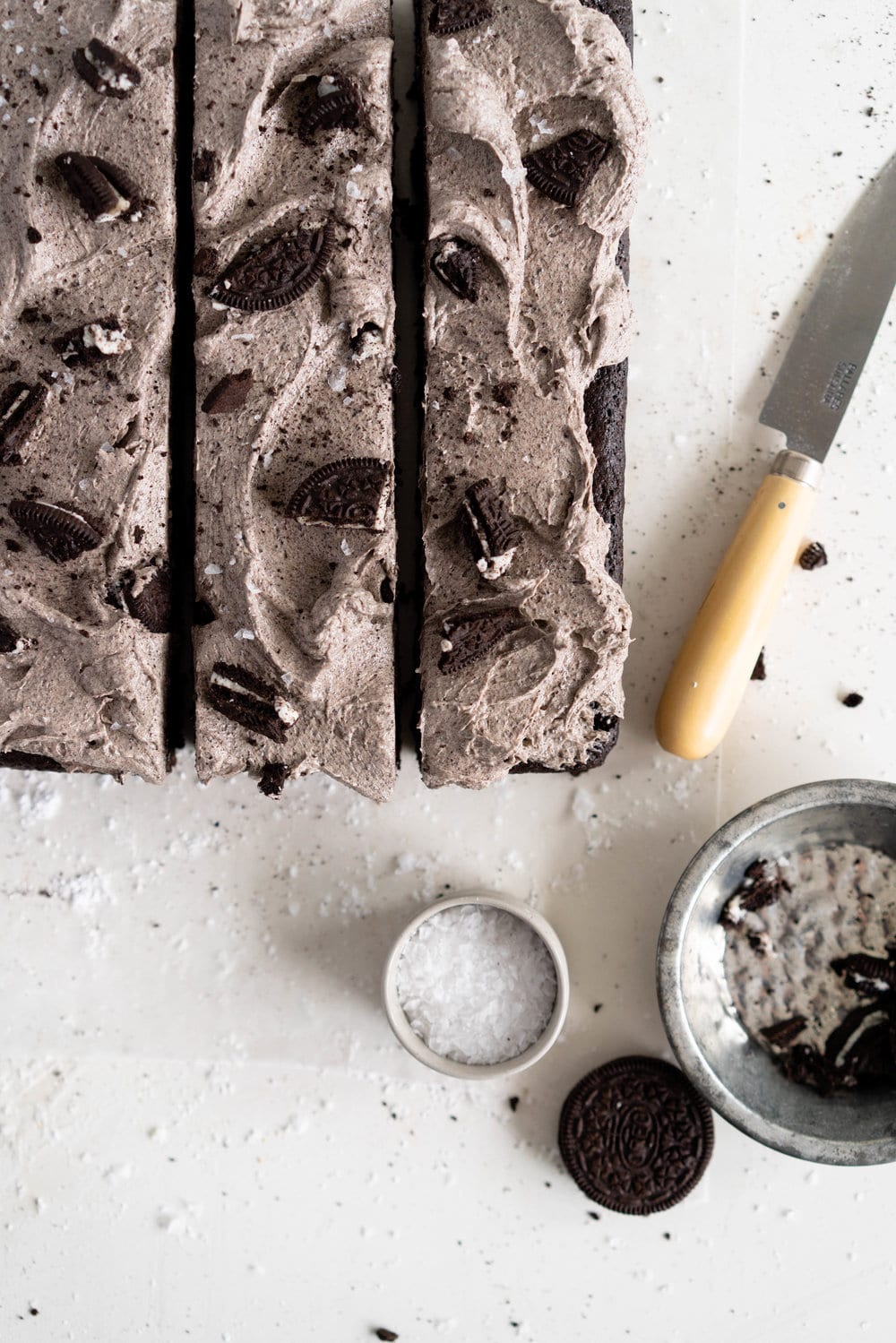 I got to have a wee chat with @goodmorningamerica

If you need a wee project for the weekend, my espr

Have you roasted fruit before? It’s perfect for

Ok I know I said no more pink sprinkley things but

There’s a new recipe on the blog today - for fun